Trystan prides himself on his professionalism, integrity and his continuing support for an industry undergoing great transition. His commitment to the finance industry was recognised in 2012 when he was delighted to have been elected as the Deputy President of the Chartered Insurance Institute of Chester and North Wales.

Trystan is passionate about the service he provides and the quality of advice he gives. He maintains long lasting relationships with clients and professional connections built on trust.

In his spare time Trystan can be found traversing the ridges of Snowdonia, catching lobsters off the Anglesey coast or running along the banks of the river Dee and around Chester racecourse. Trystan is married and now resides in Chester, originally being from North Wales. He stems from a professional medical family background; his father being an orthopaedic surgeon and his mother a physiotherapist.

Would you like to discuss how we can help? 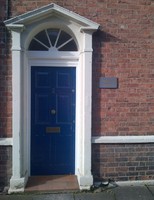 Griffin Wealth Management opens prestigious office in the heart of the historical city of Chester.